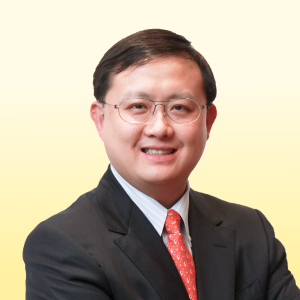 “I am delighted that HKBU has appointed Professor Lyu Aiping, an experienced and distinguished scholar, as the Dr. Kennedy Y.H. Wong Endowed Professor in Chinese Medicine. I wish that through its outstanding team and international platform, the School of Chinese Medicine will develop more quality drugs and therapies under the able leadership of Professor Lyu, thereby spreading them to the world for the benefit of humankind.”

Dr. the Hon. Kennedy Wong, BBS, JP, Managing Partner of Philip K.H. Wong, Kennedy Y.H. Wong & Co., is a visionary lawyer and entrepreneur with outstanding achievements. Apart from managing his law firm and embarking on different investment projects, Dr. Wong actively engages in community service, in particular those concerning youth development. He was Chairman of the Hong Kong United Youth Association and Vice-Chairman of the All-China Youth Federation. He also co-founded the Hong Kong-Taiwan Exchange Foundation to strengthen exchanges and communications among young people across the straits. In 1998, Dr. Wong was named one of the Ten Outstanding Young Persons of Hong Kong. In 2003, he was named one of the Ten Outstanding Young Persons of the World and appointed to the national committee of the Chinese People’s Political Consultative Conference. In 2007, the University of Kent, his alma mater, conferred upon him the Honorary Doctor of Civil Laws. In 2022, Dr. Wong was elected as Member of Seventh Legislative Council of the HKSAR, representing the functional constituency of Import and Export.

In the spirit of “giving back to the society”, Dr. Wong has also rendered strong and steadfast support to local and overseas education. Over the years, he has made magnanimous contributions to various universities for setting up scholarship funds and enhancing teaching and learning facilities. He has also engaged in charity projects on the mainland, particularly at remote and impoverished mountainous regions. In recognition of his tremendous contributions to society, he was awarded the Bronze Bauhinia Star (BBS) from the HKSAR Government in 2005.

The University has shared deep associations and friendship with Dr. Wong. In as early as 2002 Dr. Wong was appointed a member of the Council where he served for nine years. He also served as Chairman of the Student Residence Management Board and the Dr. Ng Tor Tai International House Management Board. He has witnessed the advancement of the School of Chinese Medicine (SCM). He has made generous donations in support of the Distinguished Visiting Professorship Scheme and the SCM’s project “Active Pulse Analyzer for Traditional Chinese Medicine Applications”. In 2010, he supported the establishment of the “Dr. Kennedy Y.H. Wong Endowed Professorship in Chinese Medicine” for recruiting a prominent scholar to lead SCM’s endeavours in cutting-edge research, with the aim of developing better drugs and therapies for the betterment of the community.