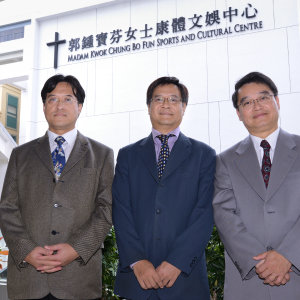 “We render our support to HKBU because of its Christian heritage. It is hoped that our donation will help the University consolidate its research team and strengthen its research capacity, thereby enabling HKBU to uphold the spirit of Christianity and serve our community with science and technology.”

The Kwok Chung Bo Fun Charitable Fund was established by Mr. Henry Kwok Ka Hing, Mr. Raymond Kwok Ka Sing and Mr. Kenneth Kwok Ka Ching in accordance with their late mother’s wish to put her estate to a broad range of meaningful uses. In 2015, the Kwok brothers made a donation through the Kwok Chung Bo Fun Charitable Fund to establish the Kwok Yat Wai Endowed Professorship in Environmental and Biological Analysis, named in honour of their father, to enhance the University’s research development of environmental and biological analysis for the benefit of society.

Devoted to their Christian faith, the Kwok family has given tremendous support to the development of young people. In 1996, the Kwok brothers offered a significant donation to establish the Tung Wah Group of Hospitals Kwok Yat Wai College in Tin Shui Wai to promote Whole Person Education. Working with the Evangelical Lutheran Church Social Service – Hong Kong, Mr. Raymond Kwok has invested in the path-breaking project called “When Teens Meet Angels” in the name of Eagle Wide Limited, aiming to help teen mothers to enhance their self-sufficiency. The Kwok brothers have also been supportive to the Breakthrough Youth Development Programmes and Media Ministries through their family foundation.

The Kwok Chung Bo Fun Charitable Fund has rendered staunch support for assisting the University’s advancement in various endeavours. Other than the aforementioned endowed professorship, it has set up the Mr. Kwok Yat Wai and Madam Kwok Chung Bo Fun Graduate School Development Fund, and The Faith•Hope•Love Endowment Fund. It has also supported the Character Development Fund, the advancement of the School of Chinese Medicine, student exchange programmes, the “Chinese Language Support and Research Programme for Non-Chinese Speaking Students in Hong Kong”, campus enhancement projects, etc. With the Fund’s significant contribution, the Entrance Plaza of the Baptist University Road Campus has been greatly enhanced and it has become a landmark. Also, a mosaic mural with the theme of “Tree of Life” has been installed at the Shaw Campus to enrich the artistic ambiance and the Christian elements of the campus. In recognition of the Fund’s generosity, the University named the Cultural and Recreation Centre at the Shaw Campus the Madam Kwok Chung Bo Fun Sports and Cultural Centre.