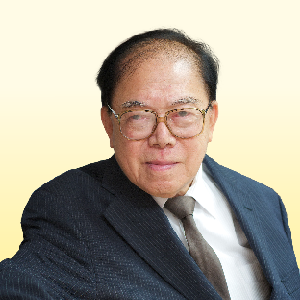 “Chinese medicine has been used for several thousand years in the prevention and treatment of illnesses, making a significant contribution to public health and the world’s medical science. It is still widely practised in the modern world and sheds light on diseases that are difficult to cure at present. Through the establishment of this endowed professorship, it is hoped that more innovative and significant research related to Chinese medicine can be conducted at HKBU. I believe the integration of this ancient wisdom with modern medical science will create notable benefits for humanity.”

Mr. Cheung On Tak was born in Shantou in 1930. Before retirement, he was Board Chairman of On Tak Metal and Plastic Factory Limited, On Tak Enterprise Company Limited and Man Po Investment Company Limited.

Growing up at a time of great upheavals, Mr. Cheung endured an impoverished childhood, like many in his generation. In 1945, at the age of 15, Mr. Cheung came to Hong Kong to work for his relatives. With his hard-earned savings, he founded his own metals and plastics business in 1959, and later established On Tak Metal and Plastic Factory Limited. Well known for his integrity and diligence, Mr. Cheung grew his business day by day. In the late 1960s, he began investing in industrial properties. As his business flourished, in the 1990s he founded On Tak Enterprise Company Limited. Mr. Cheung was recognised as an esteemed model of success among the "rags-to-riches" entrepreneurs of 20th century Hong Kong.

Mr. Cheung is a generous philanthropist with a passion for social service. As one of the leading figures in local industry and commerce, he has served in a number of industrial and trade organisations including as President of Chiu Chau Plastic Manufacturers Association Company Limited, Director of the Hong Kong Chiu Chow Chamber of Commerce, Honorary President of The Aberdeen Kai-fong Welfare Association Social Service Centre, Chairman of the Southern District Anti-drug Campaign, and President of the Hong Kong Cheung Shi Clansmen’s Association. He founded the Cheung On Tak Charity Foundation in 1992 to support society and the needy through the development of education and religious and medical enterprises. The Foundation also contributed generously to the teaching, research and development initiatives launched at a number of universities in Hong Kong.

Mr. Cheung donated generously to Hong Kong Baptist University (HKBU) in 2010 to help its School of Chinese Medicine establish the Cheung On Tak International Award for Outstanding Contribution to Chinese Medicine. The Award recognises scientists and scholars who have made ground-breaking achievements in advancing the internationalisation of Chinese medicine, in Chinese medicine research, and in promoting the modernisation of Chinese medicine for the benefit of the global community. Mr. Cheung’s donations have also established an endowment fund for institutional advancement, promoting the quality of teaching and research at HKBU.