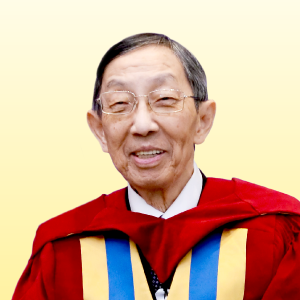 “One of the most important things in journalism is media ethics. I wish that through this first-ever Endowed Professorship in Media Ethics in Hong Kong and the able leadership of Professor Chan King Cheung will help advance the knowledge and the practice in journalistic ethics both within the academia and in the industry, and foster dialogue about media ethics in Hong Kong, across the region and beyond.”

Hailed as the “Godfather” of Hong Kong journalism, Professor Raymond R. Wong has a lifetime commitment to journalism. Professor Wong did not study medicine nor engineering according to his parents’ wishes in his youth, but instead took the road less travelled by – journalism, and that has made all the difference.

Professor Wong first began his career as a junior reporter in the United States after his completion of journalism studies at the University of Missouri in the 1950s. In 1966, he became a Professional Journalism Fellow at Stanford University. Upon his return to Hong Kong in 1968 he worked for an English-language newspaper, while teaching as a guest lecturer at the then Hong Kong Baptist College. He later became a full-time member of the faculty, and in 1974, he was appointed Head of the Department of Communication.

At a time when journalists with college education were few and far between, Professor Wong bridged the missing link between intellect and journalism through nurturing generations of journalist. Many of them later became outstanding leaders in the field of journalism and communication in Hong Kong, Greater China and other areas.

With a twist of fate, Professor Wong returned to the newsroom in 1976, taking up the role of News Controller at Television Broadcasts Limited. He was later promoted to Assistant General Manager, the most senior person in charge of the news department. The newsroom that he led won numerous local and international accolades, among those, several Peabody Awards and Edward R. Murrow Awards.

Professor Wong’s tremendous contributions to journalism education earned him an Honorary University Fellowship and a degree of Doctor of Social Sciences, honoris causa from Hong Kong Baptist University (HKBU), as well as an Honorary Professorship at the Journalism and Media Studies Centre at the University of Hong Kong in recognition of his lifelong dedication to journalism. He was also a consultant professor at the School of Journalism at Fudan University in Shanghai. He was awarded the Silver Bauhinia Star by the Hong Kong SAR government for his distinguished service to education and development of journalism and mass communication in Hong Kong in 1998.

Upon retirement in 2004, Professor Wong chaired the Committee on Review of Public Service Broadcasting. In its final report, the Committee pointed out that “press freedom and the freedom of expression are part and parcel of Hong Kong people’s fundamental and constitutional rights”.

With an enduring passion for the profession of journalism, his devotion for journalism education also knows no boundaries. In 2020, he generously made a HK$50 million donation to HKBU, the biggest single gift its School of Communication and Film has ever received, for establishment of the “Dorothy Shen Wong Memorial Fund” in loving memory of his late wife. The Fund is designated for setting up the first-ever Endowed Professorship in Media Ethics in Hong Kong, the first-ever Professional Journalism Fellowship at HKBU (“PJF@HKBU”) and scholarships for students of the School.