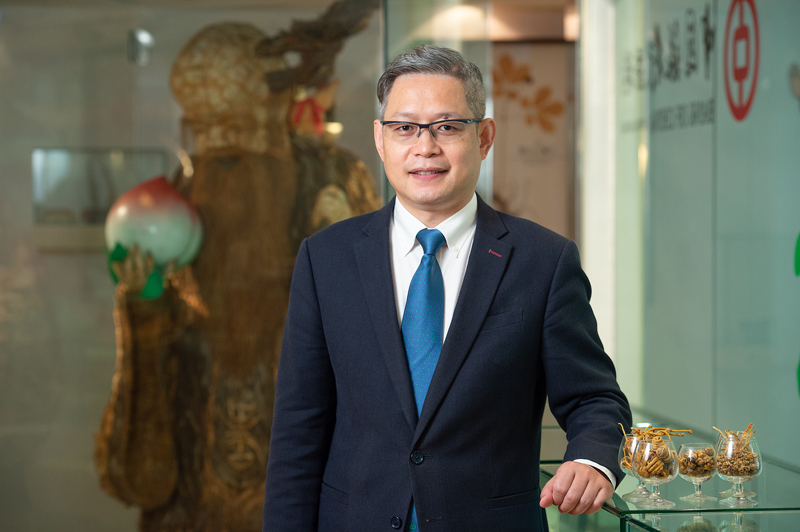 "When you carry out research, it means that you are answering a scientific question and your research has meaning to the real world. If a new technology or technique derived from your finding can be applied to the market, it proves that the technology or technique is useful. This is what every scientist would like to see." Dr. Han Quanbin, Associate Professor of the School of Chinese Medicine and Vincent V.C. Woo Endowed Associate Professor in Chinese Medicine, holds such a belief when he conducts his research, and his wish has already come true. In 2015, Dr. Han invented a fast, simple and low-cost method to authenticate Tiepi Shihu, a rare and expensive Chinese herb. This novel method has not only enabled Dr. Han to secure a US patent but also funding from the Innovation and Technology Commission. Together with his colleagues at HKBU, Dr. Han has established a start-up at the Hong Kong Science Park, providing authentication services for Chinese medicine retailers, wholesalers and planting bases of Chinese herbs on the Mainland.

Developing novel testing methods for Chinese herbs
Tiepi Shihu is a precious herb that from the Chinese medicine point of view can "nourish yin and clear heat", as well as enhance a person's immune system. Its market price can be as high as HK$20,000 per kilogram. Because of its limited production, the Tiepi Shihu that is found in the market may be mixed with other species or may even be counterfeit. It is very difficult to identify different species of Shihu with an untrained eye. In the past, the species can be differentiated only by experienced experts, or by DNA bio-coding, which is expensive and time-consuming. Therefore, Dr. Han's invention has brought to the market a new testing method that is also objective and effective. Dr. Han and his team identified a unique polysaccharide in the herb that can serve as a marker to distinguish Tiepi Shihu quickly. "Research on the composition of Chinese herbs used to focus on small molecules. Our team took an opposite path, mainly investigating the large polysaccharides inside and their bioactivities. We eventually found a unique polysaccharide in Tiepi Shihu that can serve as a marker for authentication." Patented in the US, Mainland China, Hong Kong and Macau, this technology has won Dr. Han and his team a number of awards. Moreover, their company is the only third-party certification body in Hong Kong that accredits Chinese herbal medicines, therefore attracting many Chinese medicine traders to use their authentication services. What makes the team happiest is that the amount of counterfeit Tiepi Shihu has dropped significantly after the introduction of their technique, as reported by Chinese medicine traders.

Dr. Han and his team continue to use their methodology to find new authentication methods for other Chinese medicines. In early 2019, Dr. Han and his team developed a rapid testing method for another precious Chinese herb, Cordyceps. The price of Cordyceps is much higher than that of Tiepi Shihu, reaching HK$500,000 per kilogram. The new technique not only shows a significant cost advantage but also has an accuracy comparable to the traditional genetic identification method. Again, Dr. Han has used the technique for commercial application. Recently, the testing method for Ejiao, which is renowned for its function as a blood supplement, has also been discovered by Dr. Han's team. By testing the composition of animal skin, Dr. Han's start-up can ensure the quality of Ejiao sold in the market and help consumers buy the genuine product. To the delight of the industry and consumers, Dr. Han's team is now working on the fourth Chinese medicine, the edible bird's nest. They have already identified its biomarker and are now applying for a US patent. Yet another novel authentication method for precious Chinese medicines is arriving soon.

Founding a basis for the standardisation of Chinese medicines
Identifying biomarkers of herbs has long been a time-consuming process, usually taking a couple of decades. However Dr. Han and his team have been able to invent testing methods for a number of precious Chinese medicines in only a few years. He attributed this success to his team's unconventional research direction, striving to develop authentication methods that focus on qualitative/quantitative analysis of macro molecules, "Quality control requires knowledge of a variety of disciplines such as chemistry, biology and clinical studies on Chinese medicine. This is not as simple as it sounds. For years, HKBU has been conducting research concerning quality control. We definitely have an edge." Dr. Han explained that quality control of Chinese medicine is not simply a matter of distinguishing genuine from fake herbs. What is more important is to study the active ingredients of Chinese medicines, providing valuable information to consumers. "Quality control means that we are responsible for the products' quality. I wish we can identify specific biomarkers and active ingredients of Chinese herbal medicines through innovative means, so as to develop an objective standard. Doing so will by all means help foster the standardisation and internationalisation of Chinese medicine."

Launching a free Phytochemical Images Database to promote research
In 2015, Dr. Han helped the School of Chinese Medicine launch Hong Kong's first bilingual Phytochemical Images Database. Apart from providing information about bioactive compounds found in medicinal herbs, the Database introduces methods of qualitative/quantitative analysis and sample preparation as well as real nuclear magnetic resonance (NMR), mass (MS) and infrared (IR) spectra. The Database enables teachers, students, researchers and professionals in the field as well as people throughout the world to acquire professional knowledge of Chinese medicines online. "Such a database is rarely seen in academia. As it is free-of-charge and open to the public, scholars around the world can use it to compare the structure of various herbs. This can benefit not only teaching but also foster research," Dr. Han said.

Pushing your limits to solve scientific problems
Born in Henan province, Dr. Han said he seldom went on long journeys when he was young. "The places I used to go were within 100 kilometres of my hometown. However, during my doctoral studies, I climbed every mountain in Henan in order to collect samples of Isodon herbs for my own research. It took a lot of time and effort, so I treasured every sample I collected." Dr. Han was then the student of Dr. Sun Handong, former Director of the Kunming Institute of Botany and Fellow of the Chinese Academy of Sciences. His research paper compared different species of Isodon herbs grown in different regions. Thanks to his hard work, Dr. Han's doctoral thesis was able to include Isodon rubescens from seven places of origin, comparing with only one place of origin cited in an ordinary doctoral thesis. His outstanding performance won him a scholarship, "The President Award", presented by the Chinese Academy of Sciences. From this experience, Dr. Han realised one thing: "To do research, you must be physically strong as it demands a lot of energy and strength." Even when he was a student, Dr. Han was aware of the great qualities and potency of Chinese medicines and therefore embarked on identifying active ingredients of Chinese herbs. In this process, he has constantly pushed himself to his limits and urged himself to go further.

Encouraging students to discover their interests
Hiking is Dr. Han's favourite leisure activity. He goes hiking every week, always together with his colleagues or students. "Hiking has a lot of benefits. You can train up your body, enjoy the spectacular scenery along your way, sometimes discover a few useful herbs, and cultivate a team spirit by interacting with your colleagues!" Having worked in a number of tertiary institutions on the Mainland and in Hong Kong, Dr. Han said he likes HKBU the best. The University has given him a lot of room to form his own research team. Apart from research, he also teaches students, which provides him with an opportunity to learn from young people. "At HKBU, we do not have many Chinese medicine students, so I can encourage them to work at our labs from their first year of study in order to gain more experience. By doing so, they can also find out where their interest lies and think about how to develop their career."

"Questions drive us to do research. Scientific research is in fact a process of finding answers to these questions," Dr. Han believes. Because of his sincere attitude towards scientific research, Dr. Han has become an expert in natural product chemistry and quality analysis of herbal medicines. His research findings are the result of his experience accumulated over the years. There is no short cut to a new discovery. You have to solve problems step by step. 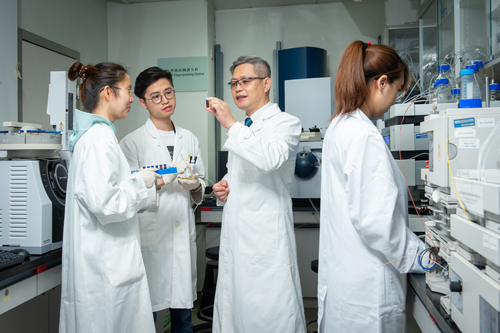 Dr. Han and his research team 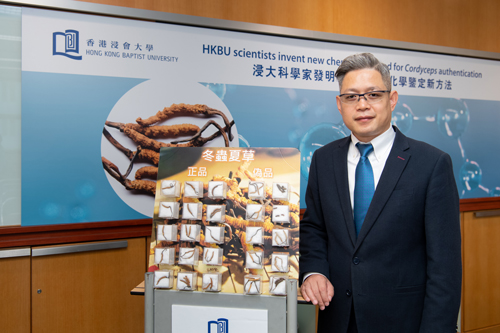 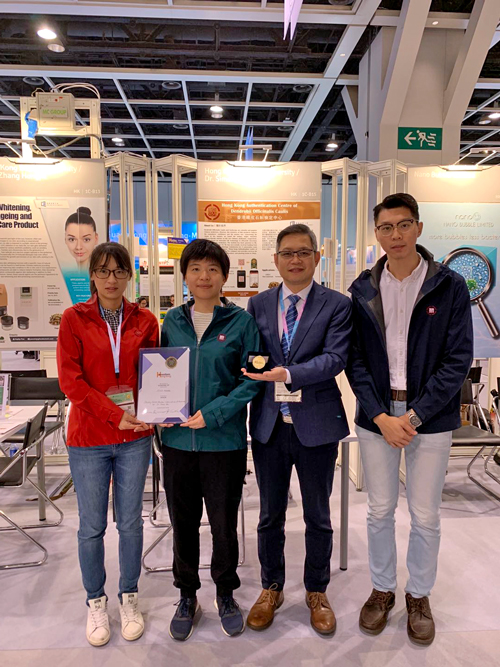 "Quality control markers for use in herb authentication" project has won Dr. Han a gold medal at the First Asia Exhibition of Inventions Hong Kong 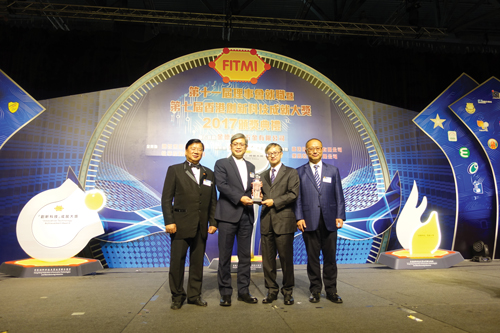 The testing method of Tiepi Shihu has won Dr. Han a silver medal at the Hong Kong Innovative Invention Award 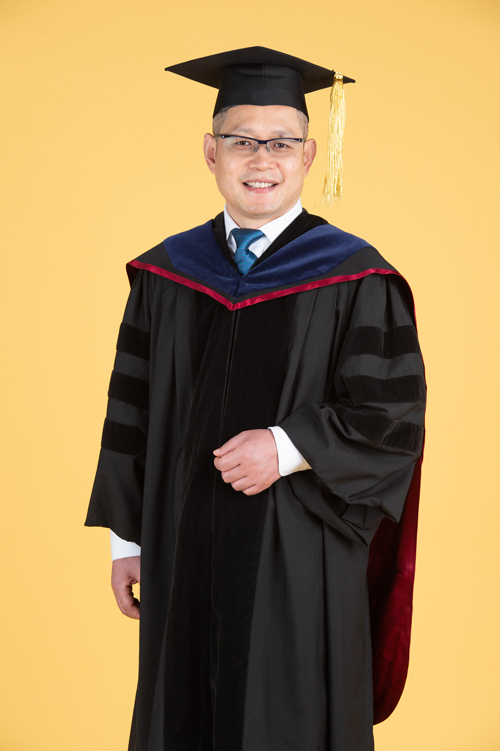