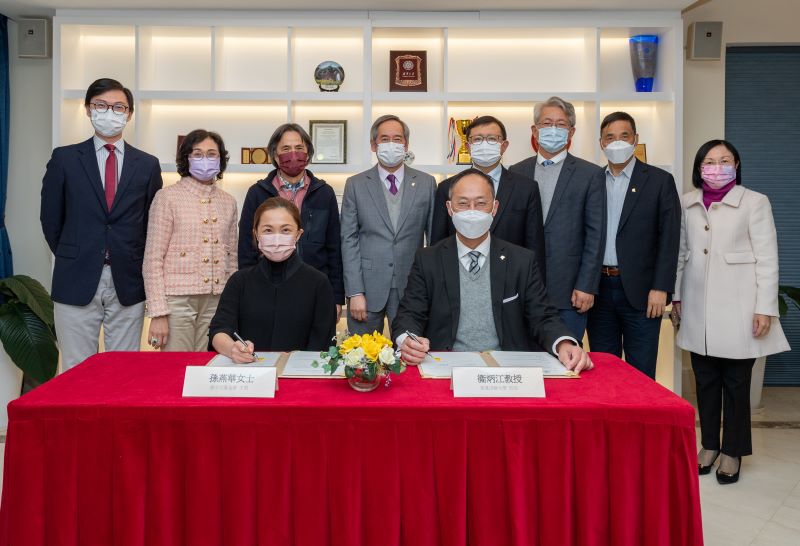 Ms. Chloe Suen and Prof. Alexander Wai signed the agreement under the witness of representatives from the Simon Suen Foundation and HKBU 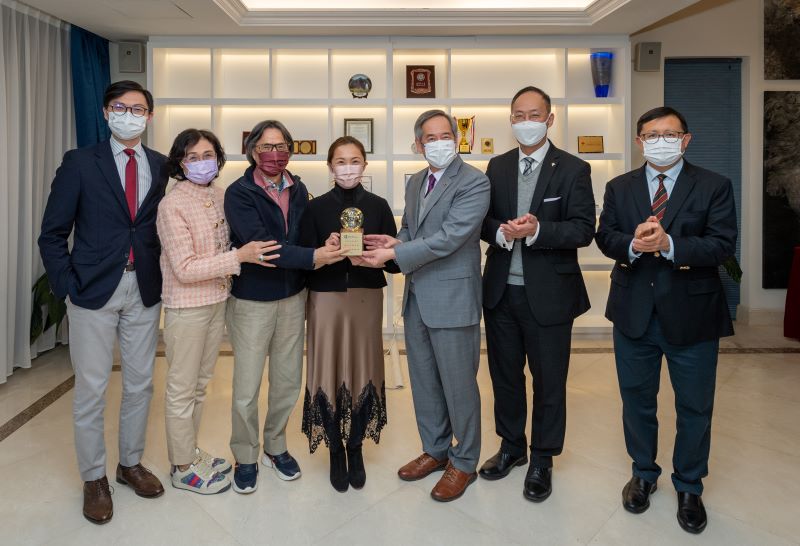 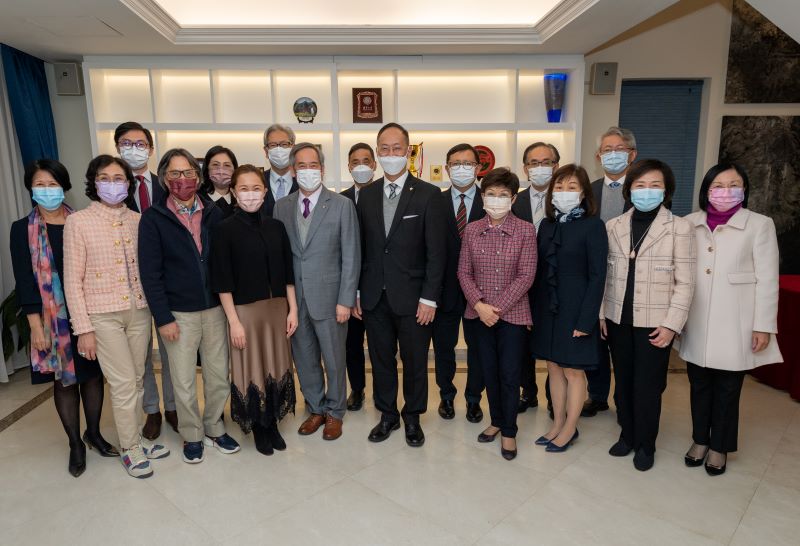 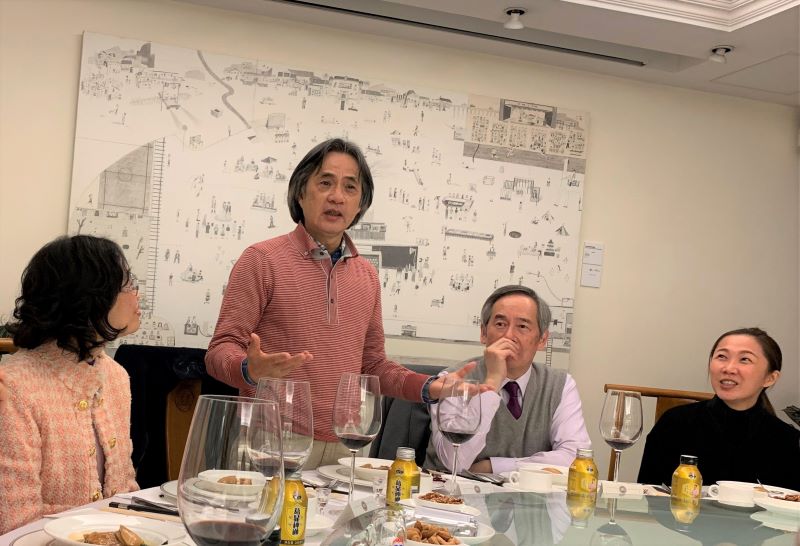 Dr. Simon Suen hoped that the donation will benefit the community through Chinese medicine research 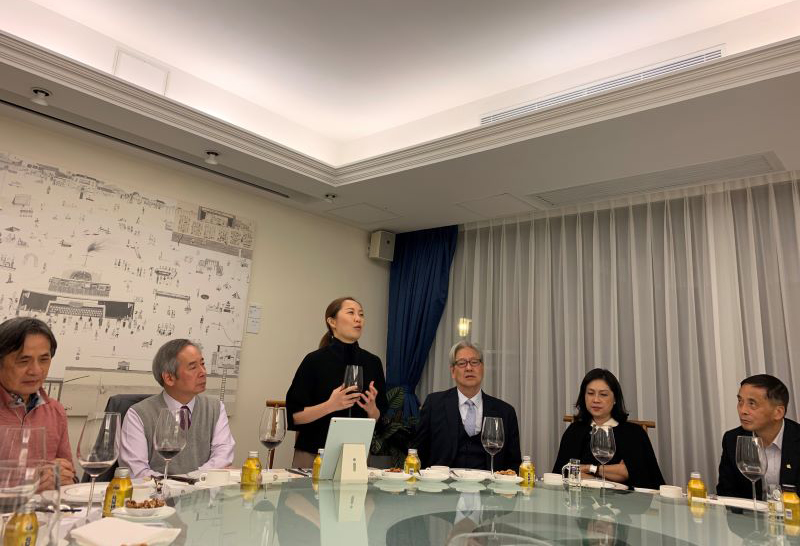 Ms. Chloe Suen delivered a speech at the dinner after the ceremony 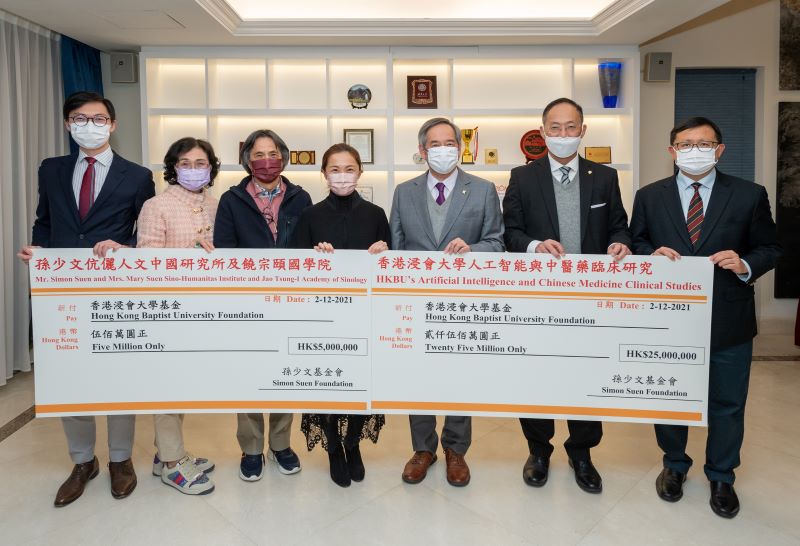 HKBU recently received a generous donation pledge of HK$30 million from the Simon Suen Foundation. Part of the donation, which amounts to HK$25 million, will be designated for the University’s artificial intelligence and clinical Chinese medicine research, in particular the use of intelligent wearable devices to collect important data for related research projects. Another HK$5 million will be designated for the development of the Mr. Simon Suen and Mrs. Mary Suen Sino-Humanitas Institute (SHI) and the Jao Tsung-I Academy of Sinology (JAS).

In appreciation of the beneficence of the Simon Suen Foundation, an agreement signing and cheque presentation ceremony was held on 2 December 2021. Officiating at the ceremony were Dr. Simon Suen, BBS, JP, Founder of the SML Group, and Mrs. Mary Suen; Ms. Chloe Suen, Chair of the Simon Suen Foundation; Dr. Clement Chen, GBS, JP, Chairman of the Council and the Court of HKBU; Dr. Kennedy Wong, BBS, JP, Chairman of the Board of Governors of the HKBU Foundation; and Professor Alexander Wai, President and Vice-Chancellor of HKBU.

Speaking at the ceremony, Ms. Chloe Suen said, “The Simon Suen Foundation has been committed to preserving and promoting tradition Chinese culture. Chinese medicine is an essential part of Chinese culture. HKBU has made tremendous contributions to the development of Chinese medicine in Hong Kong. I have high hopes and full confidence in HKBU’s operation of Hong Kong’s first Chinese Medicine Hospital (CMH). I anticipate that the donation will enable the University to apply advanced technology including artificial intelligence in Chinese medicine research, and explore a new healthcare model that has the potential to reform medical services, as well as provide Hong Kong citizens with quality Chinese medicine services for the betterment of the society.”

Ms. Suen added that in line with the mission of the Simon Suen Foundation and to support the Nation’s 14th Five-Year Plan which positions Hong Kong as a hub for exchange between Chinese and Western cultures, she hopes to support young scholars and promote research in Chinese classical learning and sinology, as well as cultivate talent in classical Chinese studies and the humanities in order to promote Chinese culture and Sino-Western cultural exchange through SHI and JAS.

Professor Wai expressed his deep gratitude to the Simon Suen Foundation for its tremendous support of HKBU. He said, “Ms. Suen and her family are long-standing supporters of HKBU. On behalf of the University, I would like to express our heartfelt thanks to the Simon Suen Foundation for its generous support of the University’s research on artificial intelligence and clinical Chinese medicine, as it will help the University to promote excellence in Chinese medicine education, research and services. In addition, it will foster the development of a smart hospital and enhance the efficacy of Chinese medicine treatments, with the forthcoming CMH playing the role of the ‘flagship’ and ‘change driver’ of Chinese medicine development for the benefit of the community.”

“Ms. Suen’s steadfast support of SHI is highly appreciated. Her kind support is definitely a thoughtful gift for the 10th Anniversary of SHI,” added Professor Wai.