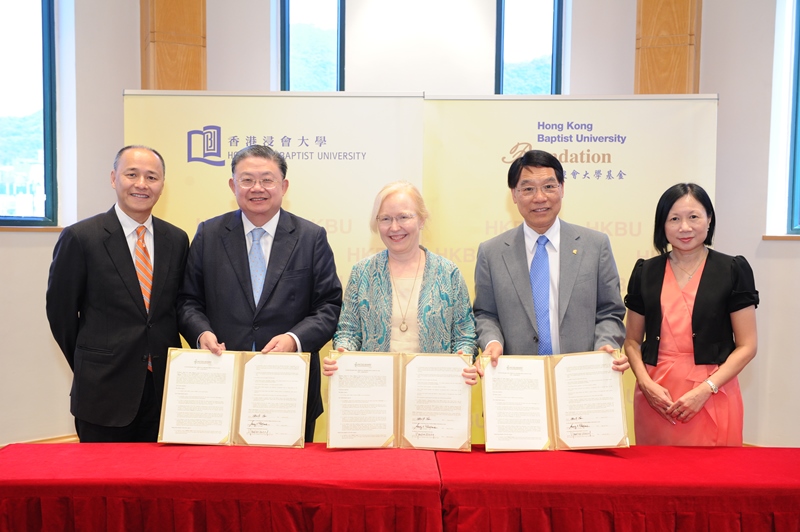 The University recently received a generous donation pledge from the United Board for Christian Higher Education in Asia, including HK$1 million from Professor Albert S.C. Chan, JP, President and Vice-Chancellor, towards the United Board.  The whole donation will be used to support the establishment of scholarships and hosting of exchange programmes, with a view to advancing the shared mission of the United Board and HKBU of strengthening whole person education.

In recognition of the donors' generosity, an agreement signing ceremony officiated by Dr. Nancy E. Chapman, President of the United Board, Professor Albert Chan, and Mr. Cheng Yan Kee, JP, Chairman of the Council and the Court, was held on 26 June 2015.  The ceremony was witnessed by Mr. Ricky Cheng, Executive Vice President of the United Board, and Mrs. Lily Chan, Director of University Advancement.

Founded in 1922, the United Board for Christian Higher Education in Asia is a historic organisation with a contemporary mission to support whole person education and a Christian presence in colleges and universities in Asia.  The United Board works with higher education institutions in Asia to strengthen institutional leadership, campus-community partnerships, faculty development, and programmes in culture and religion.  Since 1972, the United Board has generously donated more than HK$22 million towards HKBU in support of its various endeavours.