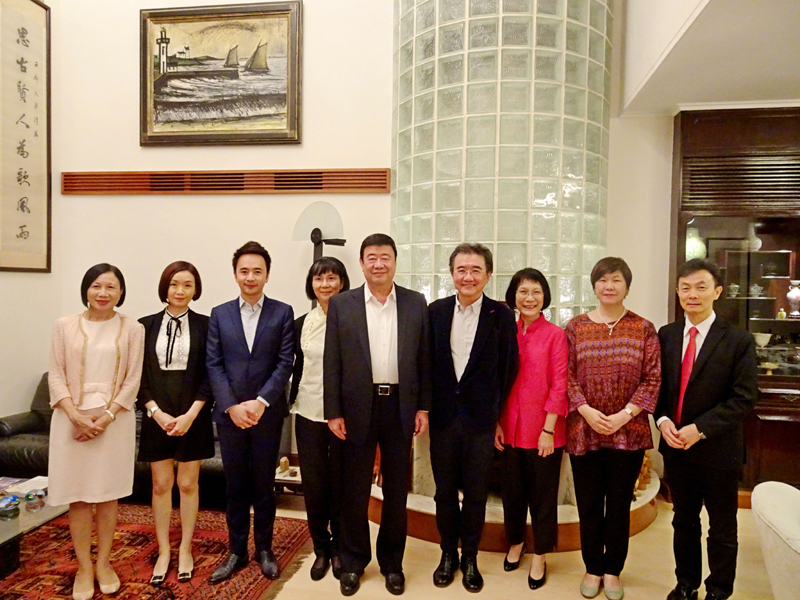 HKBU representatives paid a visit to Macau on 16 May 2018 to meet with Dr. Liu Chak Wan (centre), Member of the Board of Governors of the HKBU Foundation, Member of the Executive Council of the Macau Special Administrative Region and Chancellor of Macau University of Science and Technology, and Mrs. May Liu (fourth from left).  Dr. and Mrs. Liu hosted a dinner at their residence for the representatives. They included Professor Roland T. Chin, President and Vice-Chancellor, and Mrs. Zina Chin; Mr. Yeung Chee Kong, Associate Vice-President (Engagement); Professor Eva Man, Director of Academy of Film; and Mrs. Lily Chan, Director of University Advancement and Secretary-General of the HKBU Foundation. Mr. Carson Liu and Mrs. Betty Liu, son and daughter-in-law of Dr. Liu, also joined the dinner. They exchanged views on the latest developments of higher education in the region.

At the dinner, Professor Chin praised that Dr. Liu and Mrs. Liu are our distinguished alumni who have made notable achievements and contributions in Macau, particularly the founding of Macau University of Science and Technology.  He expressed our sincere appreciation for the couple’s staunch support for the University over the years.