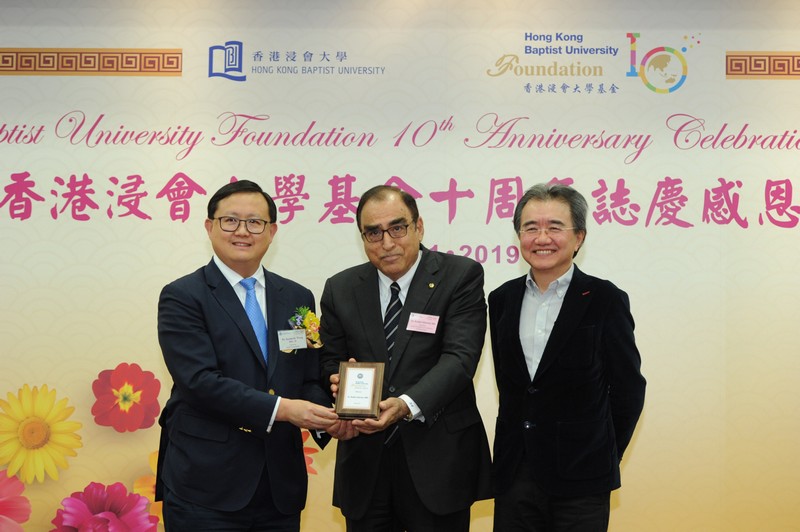 Dr. Aharoni became a Director of the HKBU Foundation in 2019 and received his Foundation Certificate at the Foundation’s Thanksgiving Reception 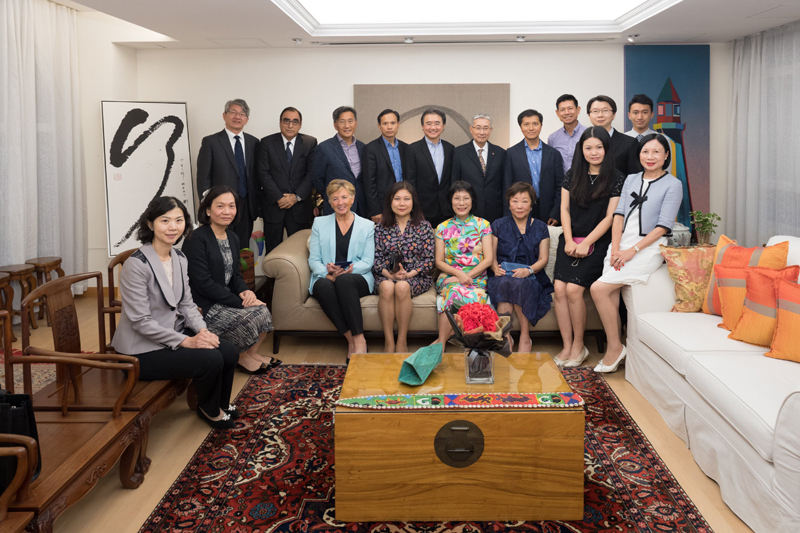 At a dinner hosted by President Chin in 2018, Dr. Aharoni exchanged views with community leaders and HKBU representatives 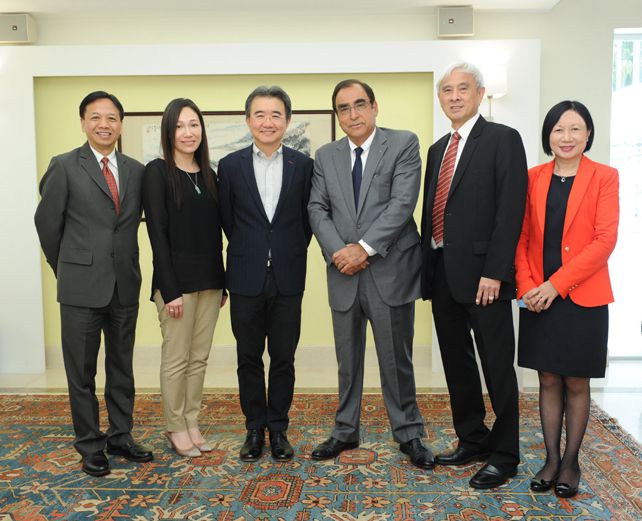 Dr. Aharoni paid a visit to the University in 2016 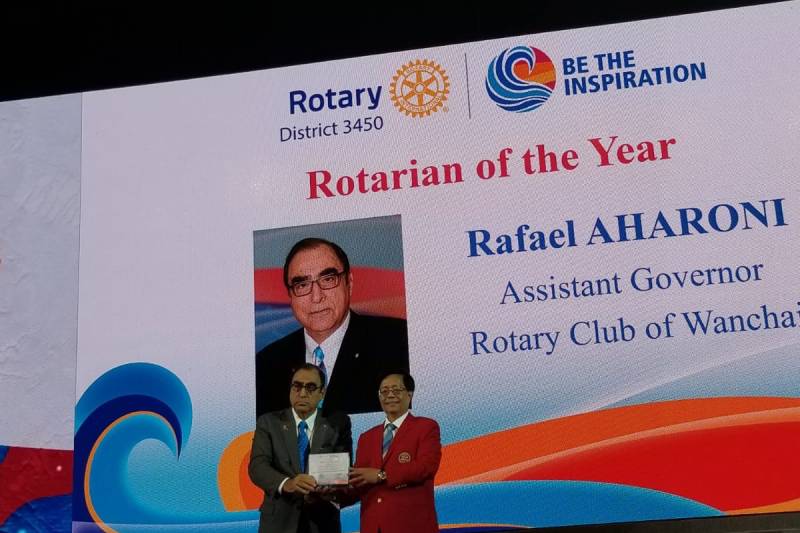 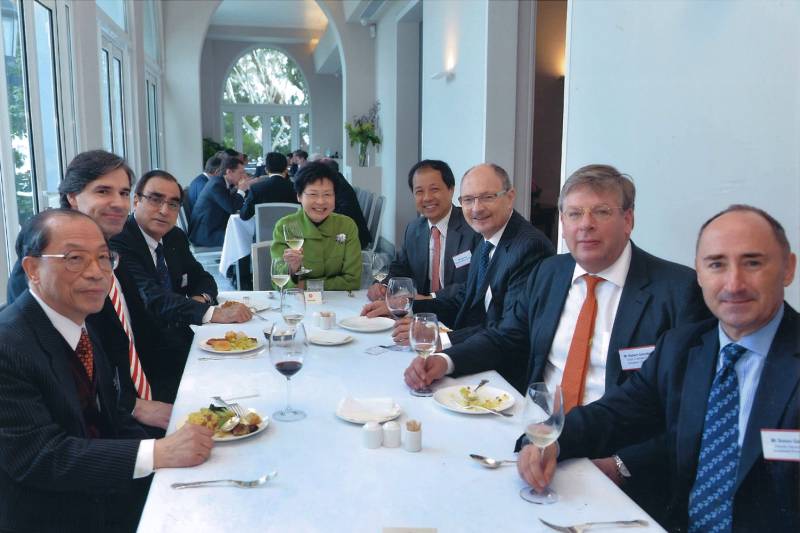 Dr. Aharoni joined a luncheon at the Government House 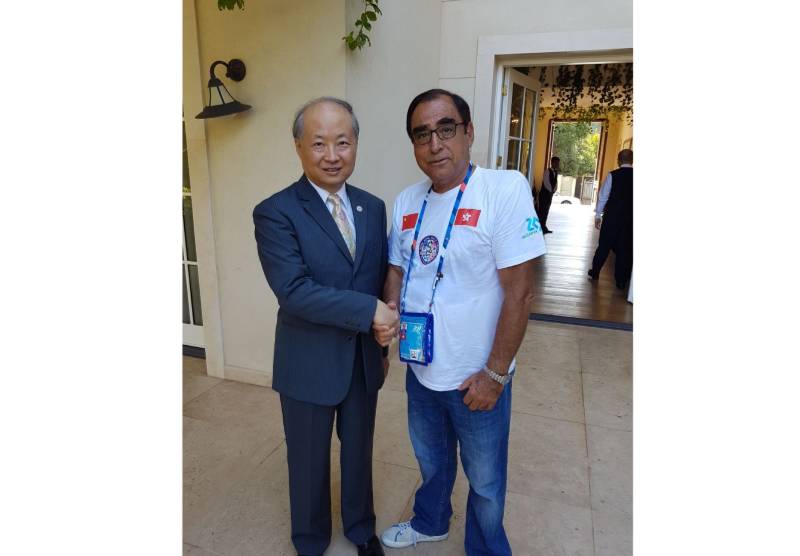 Dr. Aharoni received a warm welcome from Mr. Zhan Yongxin, the Chinese Ambassador to Israel, during his visit to the Ambassador’s residence in 2017 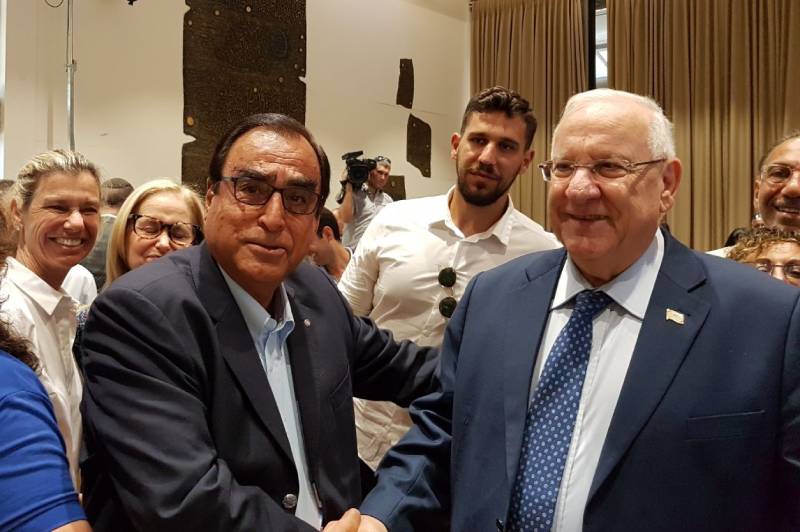 Dr. Aharoni had a private visit to the residence of Mr. Reuven Rivlin, President of the State of Israel, in Jerusalem in 2017

In the past decade, since the inception of the Hong Kong Baptist University Foundation in 2009, Member in Focus has interviewed more than 150 remarkable social leaders and outstanding persons. We always ask our interviewees to share with us their key to success, as we did with our latest interviewee, Dr. Rafael Aharoni, Chairman of the Israeli Chamber of Commerce in Hong Kong. “I do believe in destiny. For what I have achieved and gained all these years, I give most of the credits to destiny,” replied Dr. Aharoni. What a thought-provoking answer.

Falling in love with Hong Kong
Born in Israel and receiving his education in the United States, Dr. Aharoni was the fourth generation of the Mason family that enjoyed a long-standing reputation in the US diamond industry. He first came to Hong Kong in 1969 during a business trip and immediately fell in love with the place. He moved to Hong Kong permanently in 1989. What is the attraction of this Pearl of the Orient to Dr. Aharoni? “The Chinese and the Jews have a lot in common – integrity, dignity, long-term vision and emphasis on family values. I like the people here,” he said.

Dr. Aharoni started his own business in an early age, focusing on the manufacture, import and export of diamonds. Besides Hong Kong, he has offices in New York, Los Angeles and Hawaii in the United States, as well as in Belgium, India, Israel, Japan, Russia and South Africa. The United States and Japan were his company’s key markets back in the 1970s and 1980s. The focus gradually shifted in the 1990s to Hong Kong, Taiwan, Bangkok and the Philippines. China also became his focus of interest after the country’s accession to the World Trade Organisation. Overall, Dr. Aharoni has enjoyed huge success in the Asian jewellery market.

Talking about Hong Kong’s competitive edge, Dr. Aharoni thought that for the business sector in general, Hong Kong has an excellent geographical location, low taxation, skilled labour and an absence of a value added tax on goods and services. Undoubtedly Hong Kong is facing fierce competition from its neighbours, some of which have copied Hong Kong’s strengths and possess a large pool of labour. Nonetheless, the territory still has the know-how and can compete with its counterparts over the world if it develops its own brand.

The 4D of doing business
Although Dr. Aharoni humbly attributed his success to destiny, we can see that his considerable business acumen and insightful business philosophy play a very critical role. When describing a diamond’s specific characteristics, he says it is the combination of Cut, Colour, Clarity and Carat (4C) that denotes a diamond’s value and rarity. Dr. Aharoni also has his 4D of doing business – Direction, Determination, Devotion and Discipline. His business motto is even printed on the leaflet of his company: “Recession is only in your head. Big turnover, small mark-up. Quality, integrity, good taste. Don’t underestimate your customers or anyone.” Dr. Aharoni explained that there are ups and downs in all industries, but one can always overcome difficult times if one is not greedy. Also, one should never underestimate people. “If people are not smart, you should help them but not take advantage of them. I believe one must always think of others and give value to people. Then you will always come out ahead in life.”

Dr. Aharoni’s clients hold him in high regard. Some see him not only as a business partner but also as a friend and even a teacher. He is always willing to share his experience and ideas with his clients as he views business as a long-term relationship. His clients love doing business with him, for the precious stones he sells are of good quality and at reasonable prices. In short, he is not as money-minded as many other business persons. Because of his fair and respectful way of doing business, Dr. Aharoni has earned an enviable reputation in the diamond industry. He has also contributed greatly to promoting trade and development between the State of Israel and Hong Kong, Macau as well as Mainland China. He has been serving as the Chairman of the Israeli Chamber of Commerce in Hong Kong since 1998. The Chamber promotes Israeli business interests in Hong Kong and acts as a forum for members to exchange views and seek advice.

Serving the community
Dr. Aharoni has a strong commitment to charity. Among his many engagements, he has shown much affinity with the Rotary Club. He was President of Rotary Club of Wanchai in 2002-03 and 2012-13 and is currently Assistant Governor and Programme Director. Membership of the Club includes many of Hong Kong’s most distinguished citizens who have come together in a desire to serve. Rotarians, as the Club’s members are known, are expected to perform diligently their share of service to the Club, to their vocations, to the community and towards better international understanding. The Club’s projects include scholarships, student exchange programmes, orphanages, polio eradication activities, 3-H programmes (hunger, health and humanity), elderly homes, hospice care, and so forth. Dr. Aharoni was recently awarded the title of Rotarian of the Year. He received the Bronze Bauhinia Star from the HKSAR Government in 2012 for his valuable contribution to humanitarian and voluntary services, as well as promotion of trade in the Jewish community in Hong Kong.

What makes Dr. Aharoni so committed to charity work? “I learned to share what I have with others when I was young, and I believe it’s my duty to give back to society,” he answered. Dr. Aharoni experienced war when he was a little boy and knew all the suffering caused by it. He thought he is privileged to be able to help the needy, now that he has something to offer. He is also proud of his children who have followed in his footsteps and actively engage in voluntary work. “I am not a wealthy man, but I am very pleased that I am wealthy in my heart. Helping others keeps me energetic,” said Dr. Aharoni. “And do you know which people live the longest? The people who always give! It is not said by me, but research conducted in the United States. No wonder Hong Kong people have such a high life expectancy. I know many Hong Kong people who give to others even though they do not earn much,” he continued.

Impression of HKBU
Dr. Aharoni first came into contact with HKBU in 2016 when the University celebrated its 60th Anniversary. What was his first impression of HKBU? “I was impressed by your President, Professor Roland Chin, when I first visited the campus of HKBU. Professor Chin is a very humble, decent and intelligent person. I respect him and have trust in him. HKBU will definitely scale to new heights under his able leadership, and that is why I am willing to render my support to the University,” he answered.

Dr. Aharoni added that he has noticed a number of HKBU’s unique features. HKBU is the first institution funded by the University Grants Committee (UGC) to offer higher education in Chinese medicine in Hong Kong; its Academy of Film was named as one of the top 10 film schools in the world; and its Academy of Visual Arts is the only institution in Hong Kong that provides UGC-funded visual arts undergraduate and postgraduate programmes. He also agreed with the University’s direction of encouraging students to go abroad, and recently he made a generous donation in support of the international exchange programmes at HKBU. Dr. Aharoni thought that Hong Kong students are sometimes too shy to express themselves or socialise with people, especially with foreigners. They need an opportunity to broaden their horizons and build up self-confidence.

When talking about youth issues in Hong Kong, Dr. Aharoni reckoned that young people are now facing many challenges such as skyrocketing house prices and a not very diversified economy, while some challenges are specific to this generation. “The most important thing is we should not let our young people feel desperate. When people are desperate, they only care about themselves and fail to pay attention to the less fortunate around them,” said Dr. Aharoni.

Everything will be all right in the end
Having lived in Hong Kong for three decades, Dr. Aharoni has a very deep understanding of Hong Kong society and Chinese culture. He praised the Chinese for possessing many virtues that the West should learn from.  He also shared with us two Chinese proverbs that he likes very much – “The boat will sail straight when it reaches the bridge（船到橋頭自然直）”, meaning that everything will be all right in the end; and “How much food you can eat and how many clothes you can wear during your lifetime is destined（食幾多着幾多整定）”, implying that not everything in life can be controlled by humans. Dr. Aharoni is indeed an astute observer of life. No wonder he is such a wise, optimistic and cheerful person who can connect people from all walks of life. Everyone can benefit greatly from his wisdom.