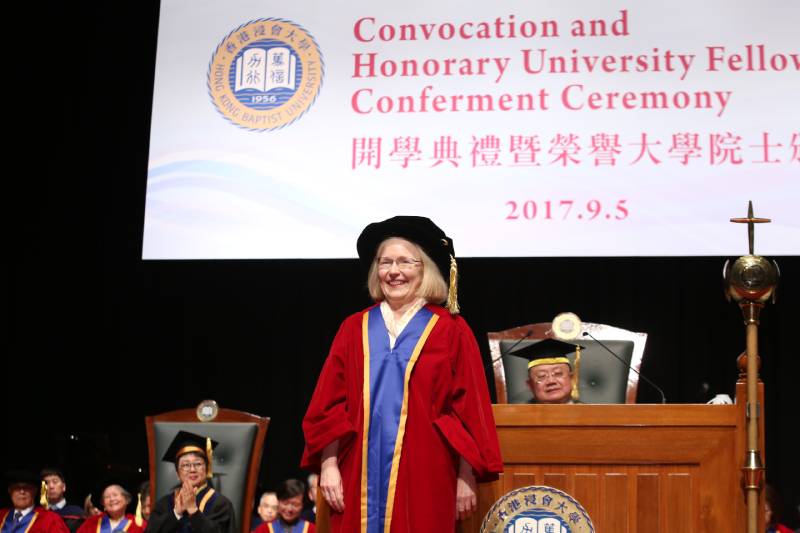 Dr. Chapman was conferred Honorary University Fellow by HKBU in 2017 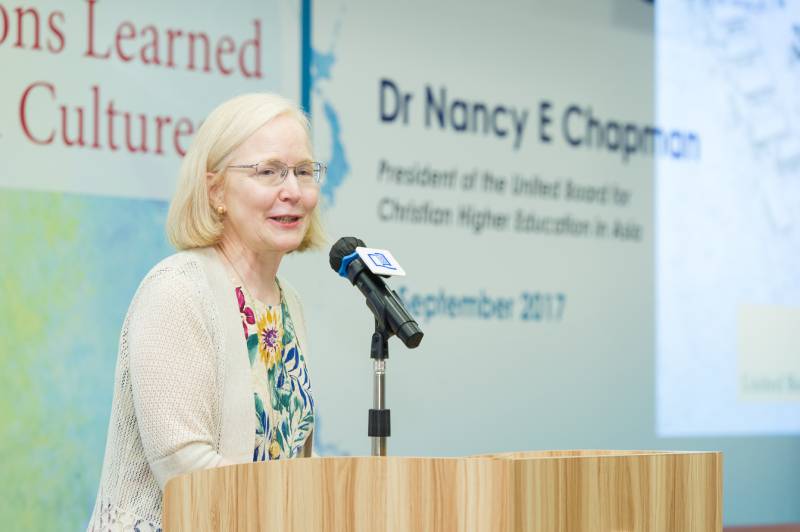 Dr. Chapman spoke at the distinguished lecture for HKBU staff and students in 2017 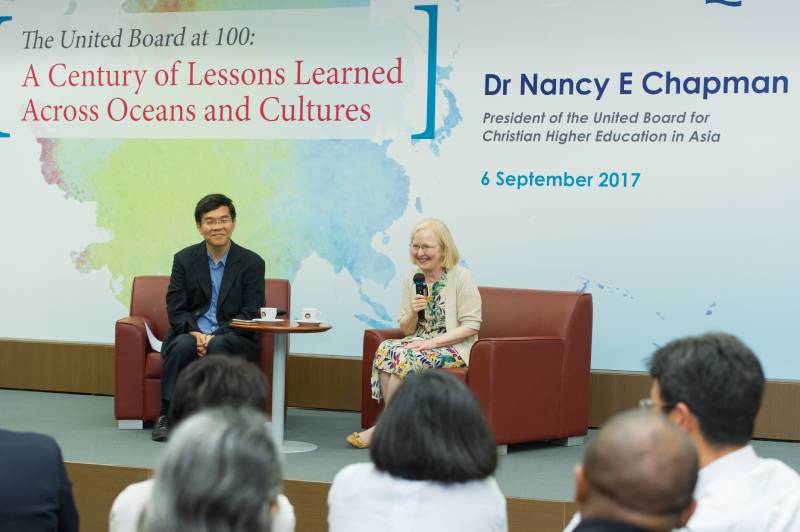 Dr. Chapman shared her views on the challenges and rewards of international educational exchange 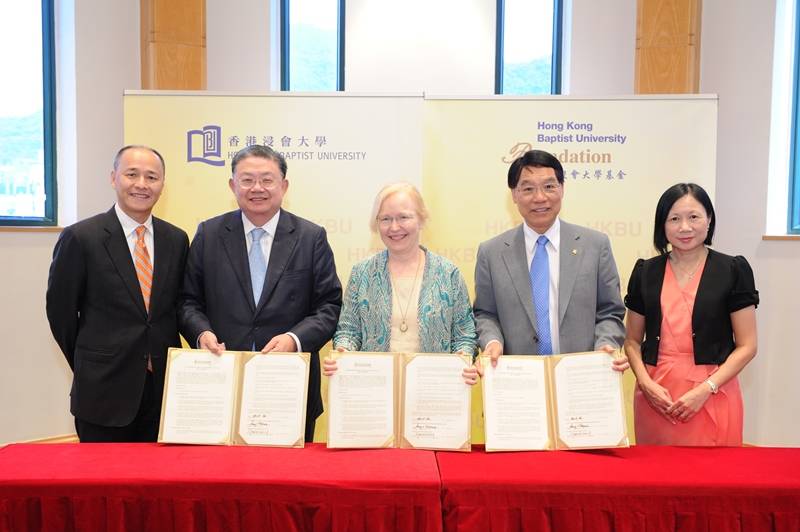 HKBU received a generous donation from the United Board, including HK$1 million from Professor Albert Chan, the then President and Vice-Chancellor, in 2015 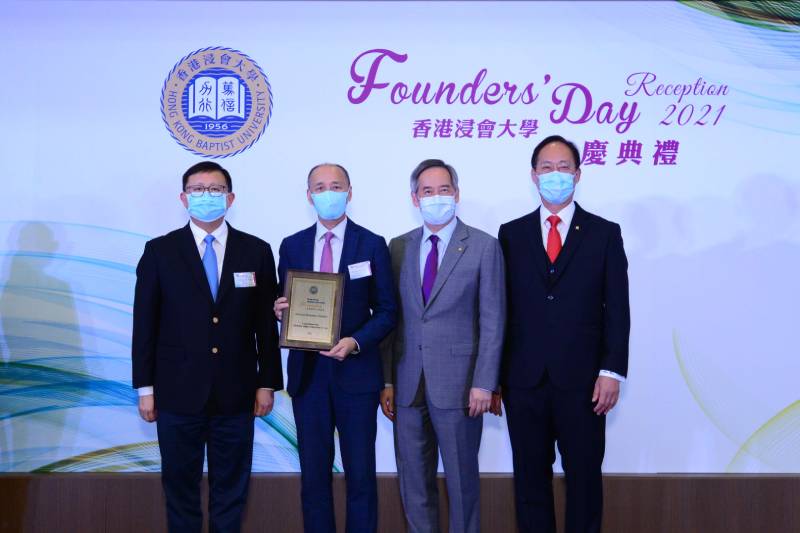 Mr. Ricky Cheng, Executive Vice-President of the United Board for Christian Higher Education in Asia received a Foundation Certificate at the HKBU Founders’ Day 2021 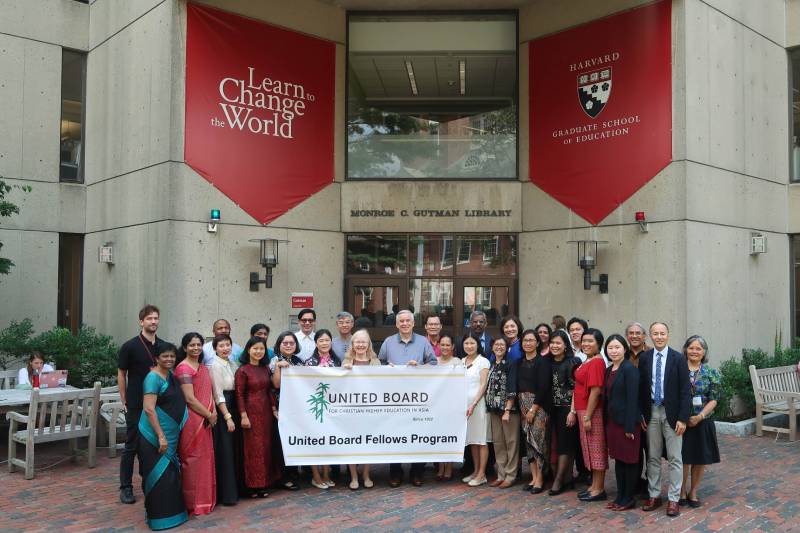 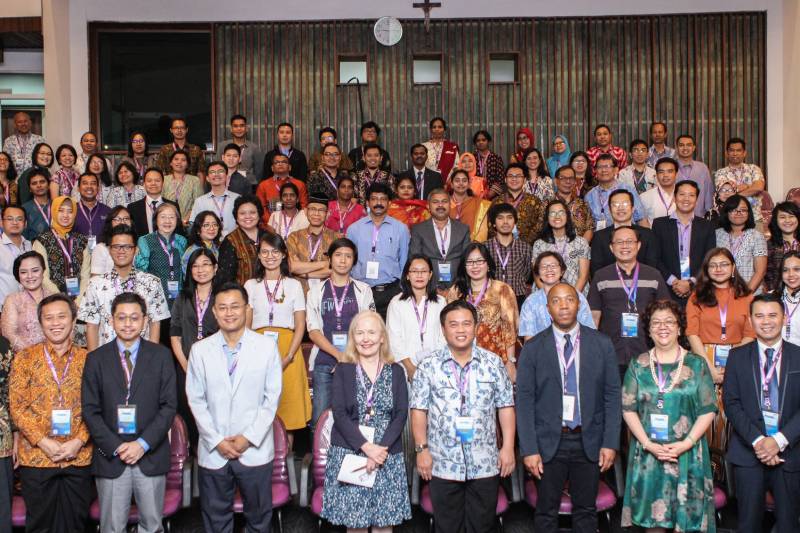 United Board for Christian Higher Education in Asia

Hong Kong Baptist University is privileged to have many loyal and dedicated supporters who have given unwavering backing to the University since its establishment in the 1950s. Among these devoted friends of HKBU, the United Board for Christian Higher Education in Asia (United Board) has a particularly longstanding relationship with the University – the year 2022 will mark the Golden Jubilee of the United Board-HKBU partnership. In this issue of Member in Focus, it is our great privilege to have Dr. Nancy E. Chapman, President of the United Board, sharing with us its stories with HKBU.

Two institutions that uphold whole person education
Founded in 1922, the United Board is a non-profit organisation committed to education that develops the whole person. In the early years, its work focused on the 13 Christian colleges and universities in China including the then renowned St. John’s University. Support from the United Board came in the form of raising funds and coordinating their use to support capital construction, library collections, student scholarships and other critical educational functions. Since 1951, it has provided significant assistance to higher education institutions elsewhere in Asia including Taiwan, Hong Kong, Japan, Korea and many Southeast Asian countries. At present, the United Board works with more than 80 institutions of higher education, from 15 countries and regions, providing scholarships, fellowships, training, professional development, project grants, and general support to promote whole person education in Asia.

The long-lasting partnership between the United Board and HKBU started in 1972 when the organisation sponsored our scholar to attend an overseas lecture. Over the past five decades, the United Board has given more than HK$24 million to HKBU in support of programmes that advance their shared mission – strengthening whole person education. “It is striking that HKBU and the United Board have both adopted whole person education as our guiding philosophies and the expression of our shared Christian heritage,” Dr. Chapman said. “As we know, human beings have many dimensions – intellectual, moral, spiritual, physical, emotional – and these various dimensions define us both as individuals and as social beings. Many institutions of higher learning focus almost exclusively on developing the intellectual and employment-oriented skills of their graduates, but they don’t necessarily fully embrace the other dimensions of human development as part of their missions.” Dr. Chapman believes that the United Board and HKBU can maintain such a long partnership because the two find many points of common interest.

Dr. Chapman regarded that HKBU has been very blessed with visionary leaders who have understood the challenges of their times and positioned the university well to achieve academic excellence, public recognition, and an outstanding record of service to Hong Kong, Mainland China, and the wider world. Moreover, she has been fortunate to get to know three of HKBU’s past presidents – Professor Daniel Tse, Professor Albert Chan, and Professor Roland Chin – and she is looking forward to meeting Professor Alexander Wai when it is possible to travel internationally without restrictions. Dr. Chapman also shared with us that the United Board has a special relationship with Professor Albert Chan. As a young man, Professor Chan received a scholarship from the United Board to pursue his undergraduate studies at International Christian University in Japan. To reciprocate the generous support he had received, Professor Chan decided to make a generous donation of HK$1 million in support of joint HKBU-United Board programmes after he became President and Vice-Chancellor of HKBU. These programmes have benefited HKBU, its students, and scholars from around Asia.

“The HKBU-United Board partnership has always been a two-way street, which has benefited both of our institutions,” Dr. Chapman remarked. Recently, the United Board collaborated with the Academic Integrity and Ethics-Augmented Reality (AIE-AR) team of HKBU’s Centre for Holistic Teaching and Learning on the project “Trails of Integrity and Ethics”, which uses digital tools to enhance teaching and learning. Giving the significant impact that the COVID-19 pandemic is having on higher education and societies around the world, Dr. Chapman expected that there will be no shortage of opportunities to collaborate further on online teaching and learning in response to the “new normal”.

A leader who is familiar with China
Dr. Chapman became President of the United Board in 2011. Prior to joining the United Board, she has already been very familiar with Asia, and China in particular. She began to learn the Chinese language when she was an undergraduate studying history at Yale University. By the time she graduated in 1978, at the recommendation of the Yale-China Association, she first came to The Chinese University of Hong Kong and then to the Hunan Medical College (later known as Xiangya School of Medicine) in Changsha, China, to teach English. These four years of working in two unfamiliar places set in motion the distinguished career of Dr. Chapman’s entire life for public service – to serve young people of other countries through higher education.

Dr. Chapman then returned to the US to pursue a doctorate in East Asian Studies at Princeton University. After finishing her comprehensive exams, she went to China again, this time to Guangzhou, where she served as Founding Director of the China office of the Institute of International Education. When she came back to the US to write her PhD dissertation, she served simultaneously as Programme Director of the Lingnan Foundation in managing grant programmes to contribute to the advancement of higher education in South China. After receiving her doctorate degree, Dr. Chapman took up the position of Programme Officer for East Asia of the Rockefeller Brothers Fund, New York. In 1994, she was deservedly appointed as Executive Director of the Yale-China Association. With such rich experience, it is no surprise that Dr. Chapman was chosen as President of the United Board in 2011.

Strengthening the capacity of universities in Asia
According to Dr. Chapman, the overarching goal of the United Board’s work is to strengthen the capacity of selected colleges and universities in Asia to design and deliver whole person education in innovative and effective ways. “My United Board colleagues and I often encounter visionary leaders and gifted educators with ambitious ideas for nurturing the hearts, minds and spirits of their students. Their ideas are abundant but the financial resources needed to turn them into practice are always limited,” Dr. Chapman said. “In general, we look for institutions that are committed to the professional development and advancement of members of their faculty and staff, including current and potential leaders of the institution, because it is they who will ensure that students have access to education that enriches them intellectually, spiritually and ethically.”

Dr. Chapman indicated that the United Board’s work across Asia would not be possible without donors’ generous support. She is grateful that they entrust the United Board to make good use of their financial support, be it for the immediate needs of the United Board’s network institutions, or for the long-term support of important programmes that benefit generations of educators and students to come. “Our development team and I work closely with our donors to learn about their interests and to match them to the opportunities we see, as well as to the needs of our organisation and those we serve. We welcome support from individuals, foundations and other institutional partners who provide in-kind support. Gifts in support of a programme, scholarship, fellowship, or higher education institution all represent a belief in the transformative power of education – and the great expectation that even small contributions can have lasting effects. That has definitely been our experience.”

Celebrating its centenary with “Great Expectations”
The United Board will celebrate its centenary next year. Dr. Chapman told us that the United Board plans to extend the celebration over the course of several years, so as to multiply the opportunities to share this milestone with the many colleagues, supporters, and friends who are important to its mission and programmes. “Great Expectations is the theme that unifies our wide-ranging plans for observing the centennial. It defines both our heritage and our outlook for the future, recognising that the United Board has been a forward-looking organisation from its earliest days,” Dr. Chapman elaborated. At present, Dr. Chapman is in the midst of putting together a publication about the United Board’s history. “The early decades of the United Board’s own history were inextricably intertwined with larger forces and trends in Chinese education as a whole,” she said. “I think what has impressed me most has been the way the United Board has re-invented itself several times over the past century while still remaining true to its core values and beliefs. I certainly hope that this ability to adapt to changing times will continue to be a hallmark of the organisation in the future because the years ahead will certainly bring much change, and at an accelerated pace, too.” We look forward to Dr. Chapman’s new book, as well as many more years of fruitful collaborations between the United Board and HKBU.