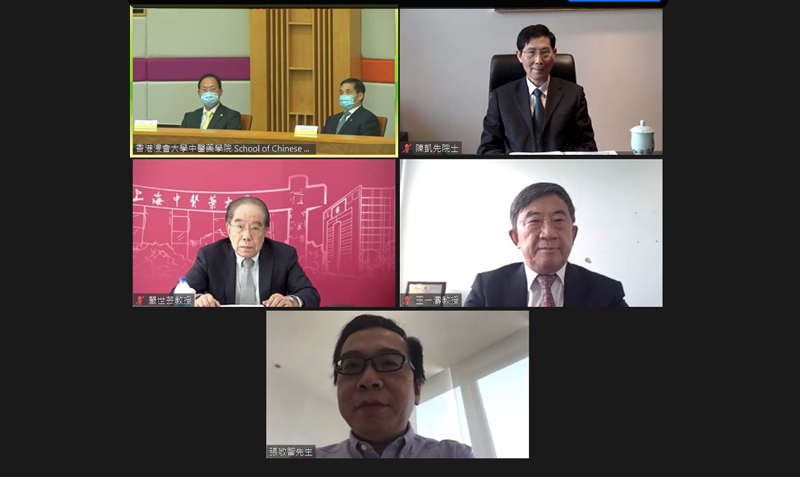 On behalf of the Cheung On Tak Charity Foundation, Mr. Gavin Cheung (third row) officiated at the ceremony online with other guests 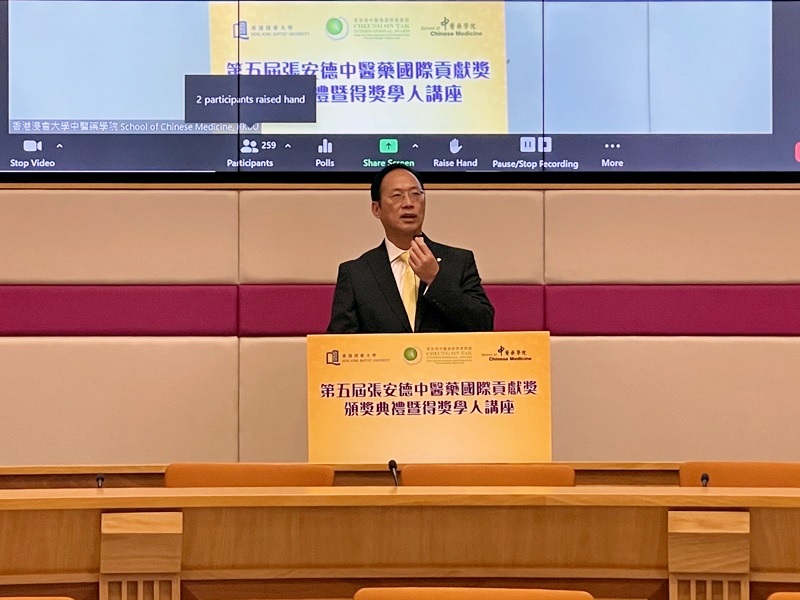 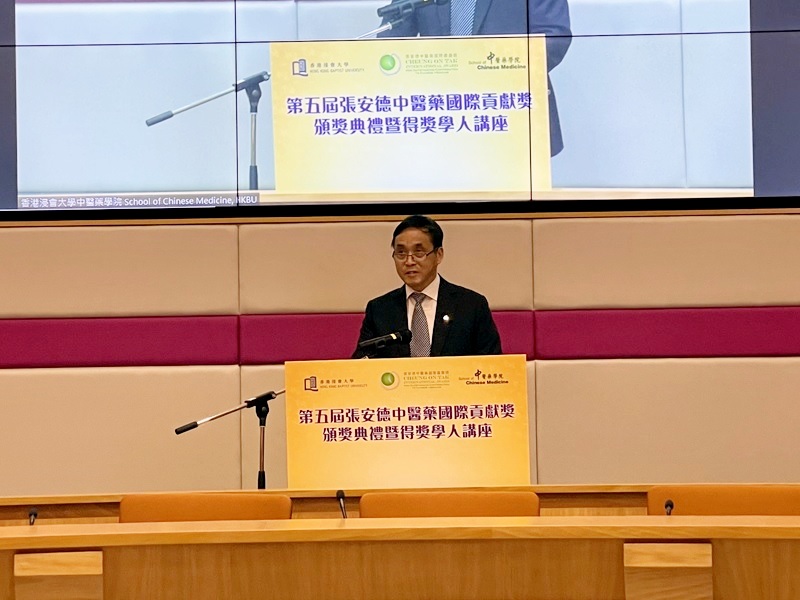 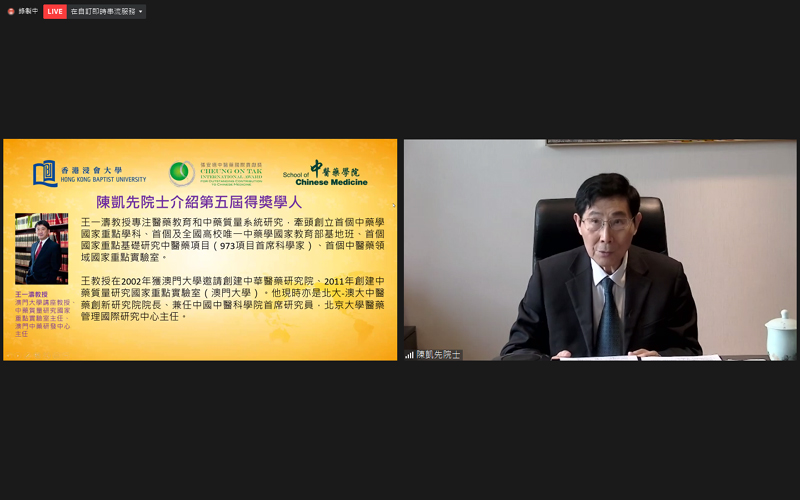 Prof. Chen Kaixian introduced the contributions of the two awardees 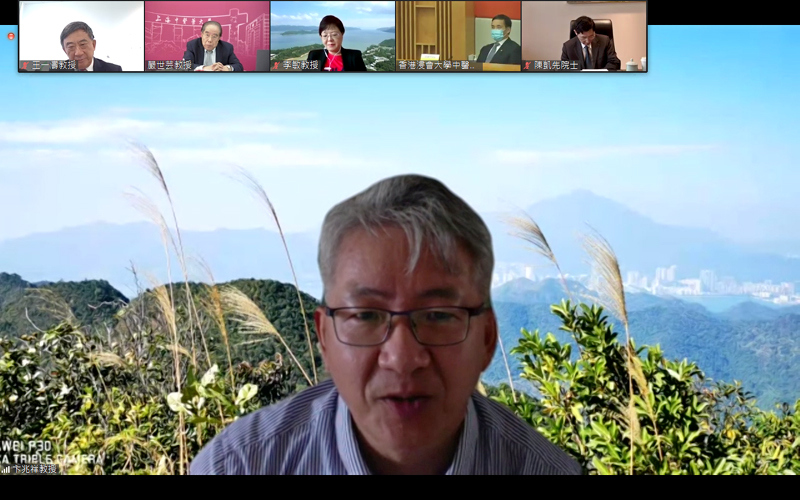 Prof. Bian Zhaoxiang participated in the Q&A session after the lectures 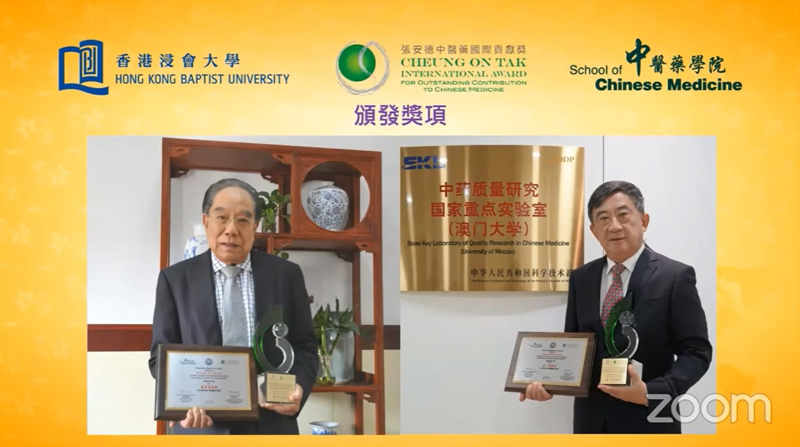 HKBU held the Fifth Cheung On Tak International Award for Outstanding Contribution to Chinese Medicine Award Ceremony-cum-Award Winners’ Lecture online on 30 March 2021. The Award was presented to Professor Yan Shiyun and Professor Wang Yitao, in recognition of their remarkable contributions to the modernisation and internationalisation of traditional Chinese medicine (TCM). Officiating at the ceremony were Mr. Gavin Cheung, Director of the Cheung On Tak Charity Foundation, Honorary Permanent President of the HKBU Foundation; Professor Chen Kaixian, Academician of the Chinese Academy of Sciences and Chairperson of the Panel of Adjudicators for the Award; Professor Ping-kong Alexander Wai, President and Vice-Chancellor of HKBU; and Professor Lyu Aiping, Dean of Chinese Medicine. HKBU representatives including Professor Bian Zhaoxiang, Associate Vice-President (Chinese Medicine Development), and Mrs. Lily Chan, Director of University Advancement and Secretary-General of the HKBU Foundation, as well as close to 400 participants including Chinese medicine professionals, staff and students of HKBU also joined the ceremony.

Professor Yan Shiyun is Tenured Professor and Former President of the Shanghai University of Traditional Chinese Medicine, is held in high esteem in the field for his dedicated efforts to enrich the literature of Chinese medicine. In addition to contributing to the cause of education in the many important positions he has held at national and provincial levels, he led the compilation of the first Chinese medical classic The Comprehensive Collection of Ancient Chinese Medical Literature and served as the Chief Technical Councillor for the compilation of the WHO international standards for TCM terminology.

Professor Wang Yitao, Chair Professor and Director of the State Key Laboratory of Quality Research in Chinese Medicines at the University of Macau and Director of Macau Center for R&D in Chinese Medicine. Having devoted his career to pharmaceutical education and systemic research into the quality of Chinese medicines, Professor Wang has a number of significant “firsts” under his belt. Not only did he found the first national key discipline in Chinese medicine, but he also developed the first Chinese medicine talent programme and the first State Key Laboratory of TCM in China. In addition, he was the Chief Scientist of the first National Basic Research Program (973 Program) in TCM.

In his address, President Alexander Wai expressed his gratitude to Mr. Cheung On Tak for making this Award possible. The Award will help promote the development of Chinese medicine and help HKBU’s School of Chinese Medicine contribute to mainstream medicine.

Please click here for details of the Fifth Cheung On Tak International Award for Outstanding Contribution to Chinese Medicine.