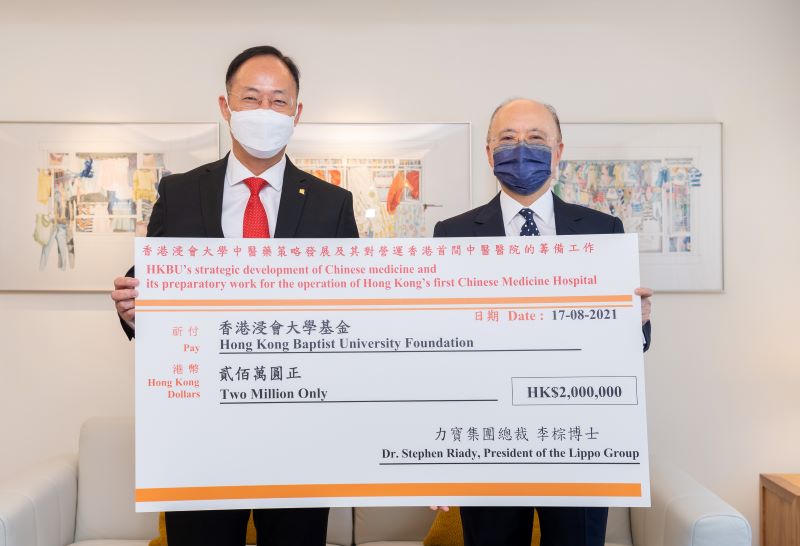 The University received a generous donation of HK$2 million from Dr. Stephen Riady, President of the Lippo Group, in support of the HKBU’s strategic development of Chinese medicine and its preparatory work for the operation of Hong Kong’s first Chinese Medicine Hospital (CMH).

At the ceremony, Professor Wai expressed his deep gratitude to Dr. Mochtar Riady and Dr. Stephen Riady, Honorary Chairman and President respectively of the Lippo Group, for their unswerving support of HKBU, and in particular the School of Chinese Medicine over the years. He believes that with the Lippo Group’s substantial experience in healthcare business operation, its support can benefit the University’s endeavours in Chinese medicine education, research and clinical services development, including its operation of the CMH in future.

HKBU conferred the degree of Doctor of Business Administration, honoris causa, upon Dr Mochtar Riady in 2009, and an Honorary University Fellowship upon Dr Stephen Riady in 2006. The Lippo Group is currently an Honorary Permanent President of the HKBU Foundation.

The Lippo Group has an unrivalled network of healthcare businesses across Indonesia, Singapore, China and Japan, and HKBU will explore the feasibility of future collaborations with the Lippo Group on the University’s strategic development of Chinese medicine and its preparatory work for Hong Kong’s first CMH.