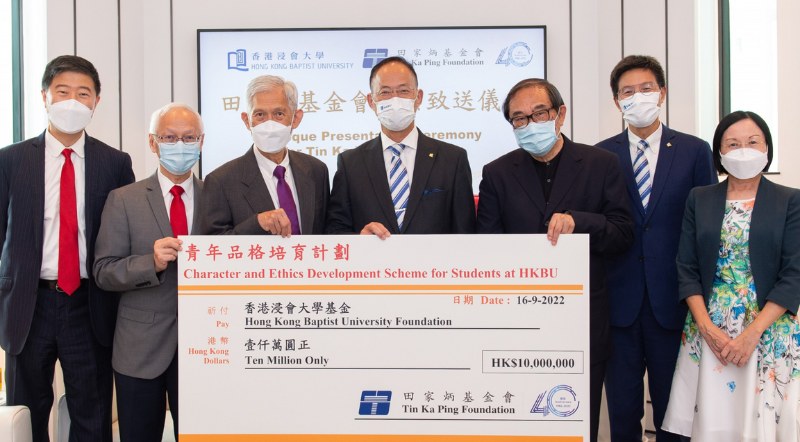 
HKBU has received a generous donation of HK$10 million from the Tin Ka Ping Foundation in support of the Character and Ethics Development Scheme for Students at HKBU, which aims to help develop young people’s character and promote the inheritance of Chinese culture.

In appreciation of the Foundation’s beneficence, a cheque presentation ceremony was held on 16 September 2022. Officiating at the ceremony were Mr. Tin Hing Sin, Chairman of the Foundation Board, and Professor Alexander Wai, JP, President and Vice-Chancellor of HKBU.

Speaking at the ceremony, Mr. Tin Hing Sin said, “The Foundation values its enduring partnership with HKBU. It is gratifying that the Foundation and the University share the same vision in promoting whole person education. I sincerely hope that participants of this three-year Scheme will be able to gain a deeper understanding of traditional Chinese culture and values through engaging in various experiential leaning activities in Hong Kong and Mainland China, thereby nurturing them to become socially responsible young talent with righteous moral values who will contribute to the nation and the world.”

Professor Wai expressed his heartfelt gratitude to the Foundation for its unswerving support of HKBU over the years. He said, “The donation will enable the University to launch a meaningful student development initiative in advancing educational development through the promotion of moral education, civility and Chinese culture. With the integration of moral education and experiential activities into the curriculum, our students will be able to acquire essential values, attitudes, skills and knowledge that are required for the 21st century. The Scheme will definitely provide our students with all-round learning experience conducive to their whole person development.”

Founded by the late Dr. the Hon. Tin Ka Ping, GBM, MBE, in 1982, the Foundation is a long-standing supporter of HKBU. It has made generous donations in support of a variety of the University’s endeavours, including the establishment of the Tin Ka Ping Education Endowment Fund, and the launch of the Mainland China Visiting Scholars Programme, the Hong Kong Creative Drama Festival, the 4E Whole Person Servant Leadership Programme, and the Chinese Writers’ Workshop, as well as supporting the HKBU Development Fund and various conferences, innovative service-learning programmes and our institutional advancement at large. 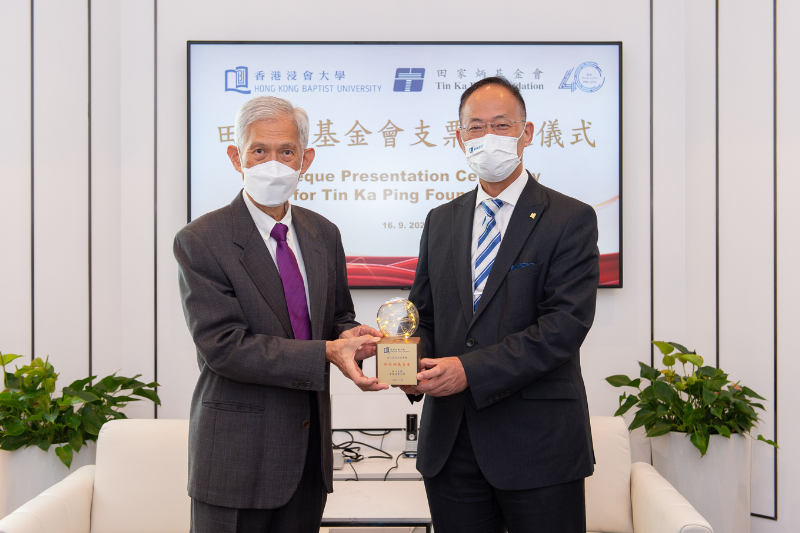