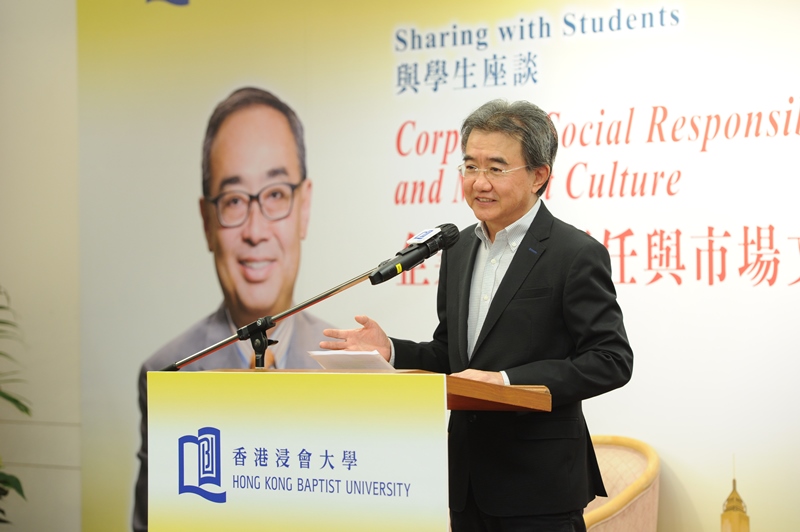 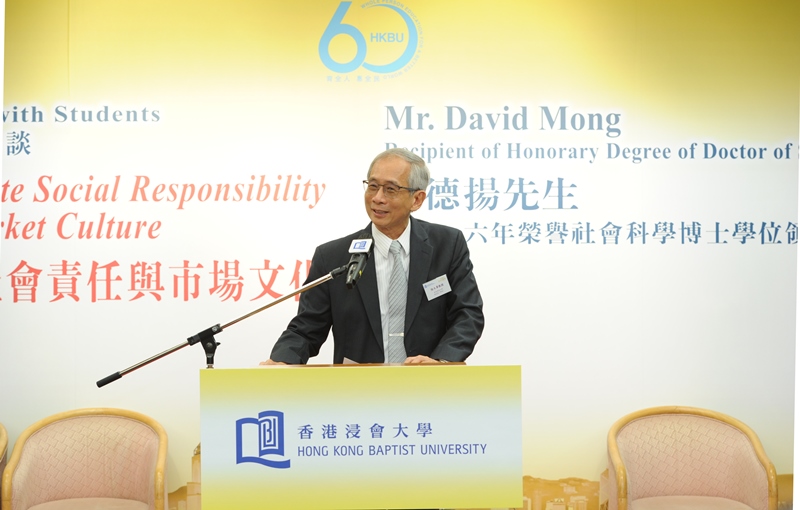 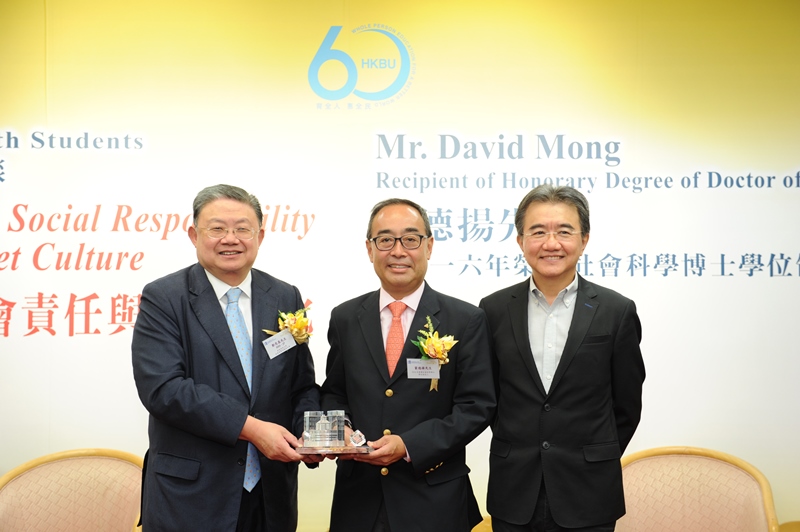 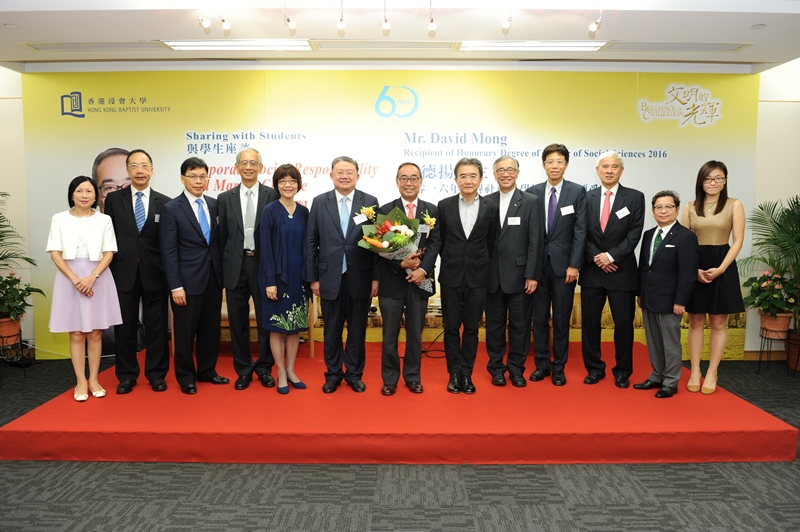 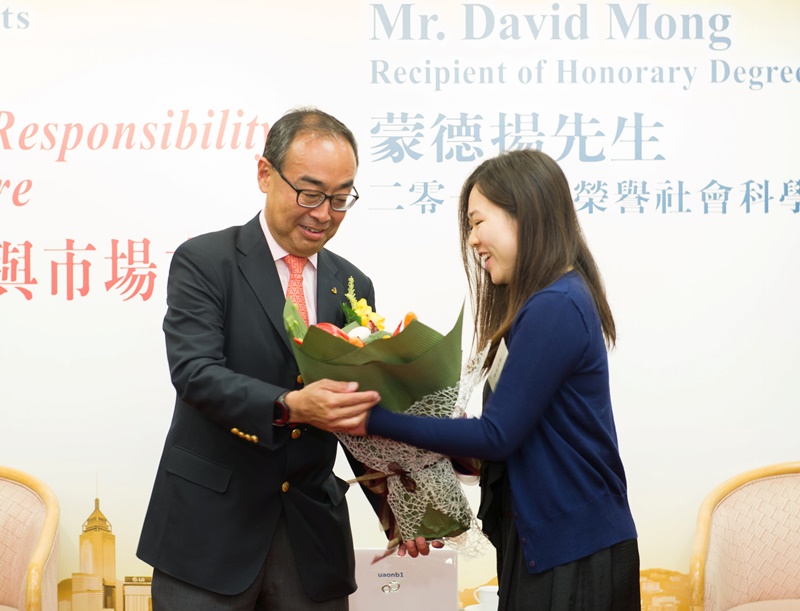 A student representative presented a vegetable bouquet to thank Mr. Mong for his enlightening sharing 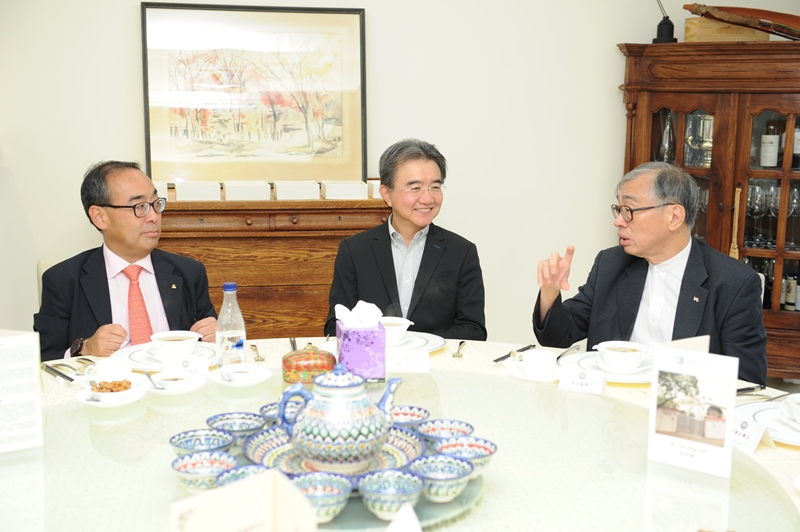 A lunch reception was hosted by
Prof. Roland Chin 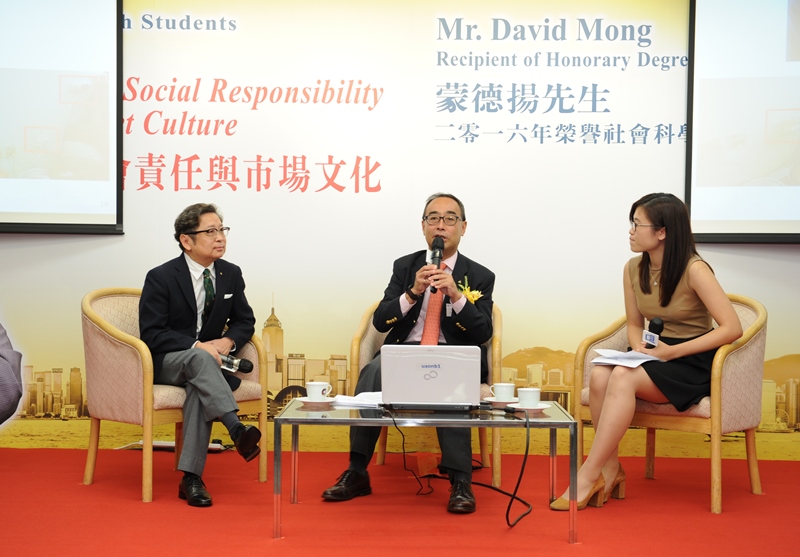 To celebrate the conferment of honorary doctoral degrees, the University organises a series of activities entitled "Brilliance of Civilization" for the honorary doctors to share their wisdom and insights with the general public. In this connection, Mr. David Mong, recipient of the honorary degree of Doctor of Social Sciences, delivered a sharing on "Corporate Social Responsibility and Market Culture " on 24 October 2016, during which he shared his views on corporate social responsibility and sustainability, as well as the recent market trend.

In his welcoming remarks, Professor Roland Chin, President and Vice-Chancellor, thanked Mr. David Mong for his distinguished contributions and staunch support to the University over the years. Mr. Mong, who served as a member of the University Council, is currently a member of the Board of Governors and the Entrepreneur Committee of the HKBU Foundation. Professor Chin praised Mr. Mong for his concern about the needs of the education sector, his business innovations and broad knowledge, and concluded that Mr. Mong has set an excellent role model for our students as he possesses the attributes of all three DNAs of HKBU, namely “caring”, “creativity” and “global vision”.

Mr. Mong shared his experience and tips of running a successful business as well as the significant role of occupational safety and corporate social responsibility play in the development of his company.  He also emphasised the importance of upholding corporate civility and social responsibility so as to work towards the principle “gain from the community, contribute to the community”. The enlightening sharing aroused keen interest and sparked enthusiastic exchanges of views among participants during the Q&A session.

To express the University's sincere appreciation, Mr. Cheng Yan Kee, BBS, JP, Chairman of the Council and the Court, presented a souvenir to Mr. Mong for his great support and meaningful sharing. The sharing was well attended by more than 140 guests, including Mrs. Pamela Chan, BBS, JP, Deputy Chairman of the Council and the Court, Dr. Joseph Lee, GBS, JP, Vice-Chairman of the Board of Governors of the HKBU Foundation, Mr. So Chung Ping, MH, Chairman of the Executive Committee of the Tsim Sha Tsui District Kai Fong Welfare Association, Honorary Permanent President of the HKBU Foundation; as well as staff, students, supporters and friends of the University.