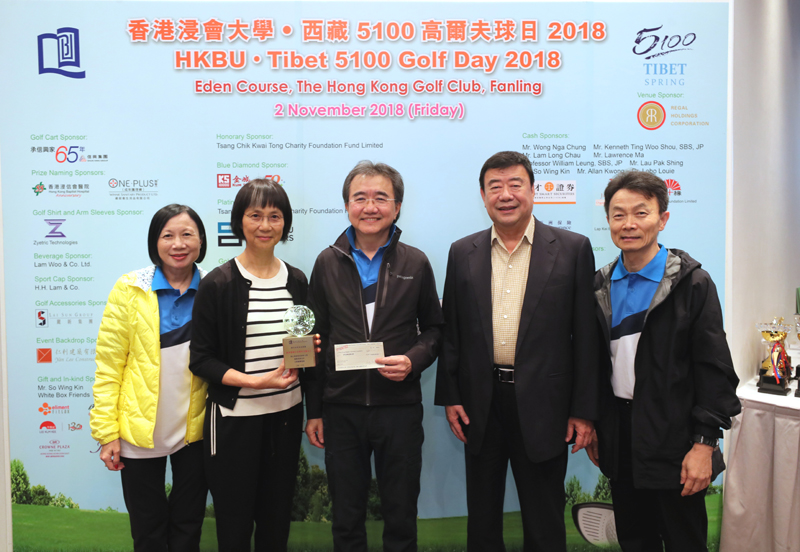 The University recently received a generous donation of HK$10 million from Dr. Liu Chak Wan, Member of the Executive Council of the Macau Special Administrative Region and Chairman of Liu’s Commerce and Industry Limited, and Mrs. May Liu in support of the University’s institutional advancement.

Dr. Liu and Mrs. Liu joined the dinner of the HKBU ‧ Tibet 5100 Golf Day 2018 earlier. At the dinner, they presented a donation cheque to the University, which was received by Professor Roland T. Chin, President and Vice-Chancellor; Mr. Yeung Chee Kong, Associate Vice-President (Engagement); and Mrs. Lily Chan, Director of University Advancement and Secretary-General of the HKBU Foundation. Professor Chin also presented a souvenir to Dr. Liu and Mrs Liu in acknowledgement of their generosity to the University.

Professor Chin praised that Dr. Liu and Mrs. Liu are excellent role models for HKBU alumni. They have made notable achievements and substantial contributions in Macau, particularly the founding of the Macau University of Science and Technology (MUST).  This generous gift will greatly benefit the HKBU’s 10-year Institutional Strategic Plan and encourage more alumni to give back to their alma mater.

Dr. Liu Chak Wan is a successful entrepreneur who is prominent in both the political arena and the business sector in Macau. In 2007, HKBU conferred an Honorary University Fellowship on Dr. Liu. Since then, he has served as Honorary Court Member of HKBU. He has served as Member of the Board of Governors and Honorary Trustee of the HKBU Foundation from 2009. He was presented with the Distinguished Alumni Award of HKBU in 2016.  Mrs. May Liu is Deputy Chairman of Liu’s Commerce and Industry Limited and she has contributed significantly to Macau through various capacities such as Member of the Board of Trustees of MUST Foundation.